To change perceptions towards Adult Orphans into a positive awareness.

Who is an Adult (Aged-out) Orphan? Individuals who reach the age of 18 years old and must leave the orphanage to live independently. They do not have the life skills, financial, emotional, or physical support. They also do not have a social family network to help guide them. Read this article about orphans aging out in Korea.

Life of Orphan’s Aging-Out in Korea

Original article posted at Donga.com news, a major newspaper in Korea.
Reposted with permission from Steve Morrison from MPAK. Translated by Steve Morrison, Founder of MPAK (Mission to Promote Adoption of Kids) Kim was abandoned by his birth parents when he was seven, and grew up in an orphanage in Ansan City in Kyung-gi province. When he turned 18 he had to be on his own (in Korea he is 19 in Korean custom.) His entire asset was a meager $5,000. He didn’t even know how to rent a room, and didn’t even know how to pay the electric bill. He felt abandoned again. 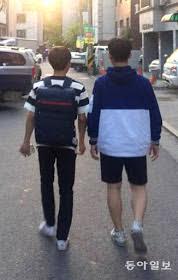 Kim Min Jae (19), just faced the Adult Day (Morrison’s note: 성년의 날, this day was established in 1973, went through some modification with the third Monday of each May being the Adult Day in Korea, applies to only those turning 19 to welcome them into adulthood of responsibility in the society). He stated, “I realized what it means to be all alone. Instead of being congratulated for turning into adulthood, the correct description is how I struggled and survived a year.”
Kim is one of those ‘All-Alone Youths”. They are also called ‘The Terminated Youths’. The social welfare law requires them to be emancipated from an institution once a youth turns 18. Each year, there are approximately 2000 youths that become ‘All-Alone Youths’.
The only support they get is the separation pay of $5,000 from the government. Kim was able to save up an additional $1,000 over the years, but he faced a stiff challenge to find a room of his own in the Ansan City where he lived for the past 12 years. He finally settled in the city of Kyung-san in the Kyung-buk province where he knew no one.
Finding a place to live was a daunting task. He did not know that he had to work through a real estate agent and sign the necessary documents. At first he spent a week at a sauna facility (Morrison note: Sauna or 찜질방is a place that people often take bath or sauna and be able to stay for short term), but his water and power was cut off after three months. He didn’t know the concept of paying the bills. He said, “I would often find some kinds of mail in my box but I put them back in the return box, and didn’t realize those were the bills.” He said, “No one at the orphanage ever taught me these things. I remember sobbing in a dark room with no electricity.”
The entire asset he had was run dry only after a month. The room deposit took $3,000, and he spent another $1,000 buying the necessary items to live. He wanted to study to become a dog trainer and enrolled in a college, but after factoring in the government grant of $2,000 to pay for the $3,200 tuition fees, he was left to pay $1,200 to pay the remaining enrollment fee, and even his emergency fund went dry.
The difficulty of hard living came as quickly as the loneliness. The basic cost of living of $550, which included $200, with telephone fees and foods were hard to meet each month. He worked a part time at a coffee shop but quit after two months. He couldn’t take his time away from studying, which was needed to qualify to maintain his government grant. Due to his part time job, his basic aid in the cost of living stopped as well. He seriously thought about withdrawing from the school. Nowadays, to save for the cost of school, he has cut down on his food expenses. To hang around with his circle of friends is out of question.
Kim is not so bad as compared to others. Chun (23) was separated from his parents for 20 years, but could not apply for the basic cost of living due to his parents showing enough income (Morrison’s note: Many children in orphanages have parents living, but never visit or support their children). He applied for a basic cost of living to attend a college, but he was told “Your parents must first submit the ‘Termination of Parental Rights’ to qualify.” He quit the school and got a job instead. Because of the financial difficulties faced by so many All-Alone Youths, most of them choose to work instead of education just so they can survive. It is believed that 77% of the orphan children desire to go to college, but only 24.1% actually do.
It isn’t that there is no education provided for them. The Ministry of Health and Welfare’s Age-Out Youth Service provides several educational programs through the orphanages, but the youths usually choose topics like ‘Expressing Myself’ or ‘Cleaning Our House’. The education programs designed to help with self-sufficiency, such as ‘How to Apply for a Rent’ is chosen by only 1.5% of the youths, and ‘Managing Your Money’ is chosen by less than 10%. There are other small care centers (such as group homes) that are not obligated to teach the similar programs to their youths. The Age-Out Youth Service worker stated, “We are still in the process of developing more effective pre-separation education programs for the aging-out youths”.
What is most needed is the financial helps for these youths. A person working at ‘The Beautiful Store’ said that “I have been saving since 2011 to individually support these youths, but the overall attitude of the people in Korea is that ‘Why help the grown up adults?’, which is prevalent in the society and that’s not easy to deal with.” He also said, “Even though they have turned into adulthood, we must not forget that they are the youths that still need our help and attention.” Park Sul-mi, the Self-Sufficiency Program Director of the Dong Myung Orphanage stated, “Not only the economic help is needed, but they also need post-separation counseling and care services as well.”